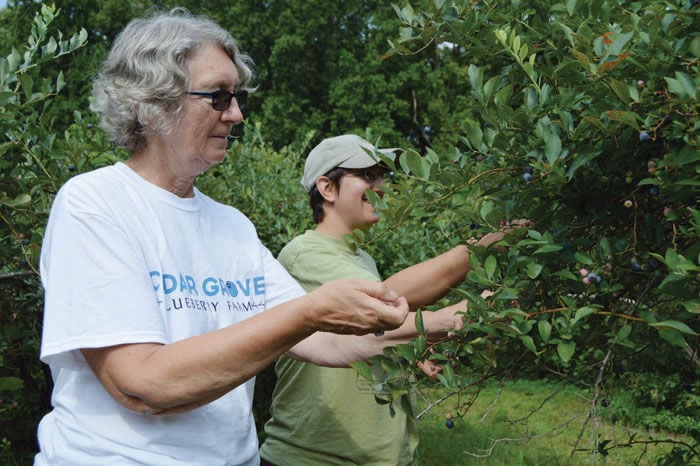 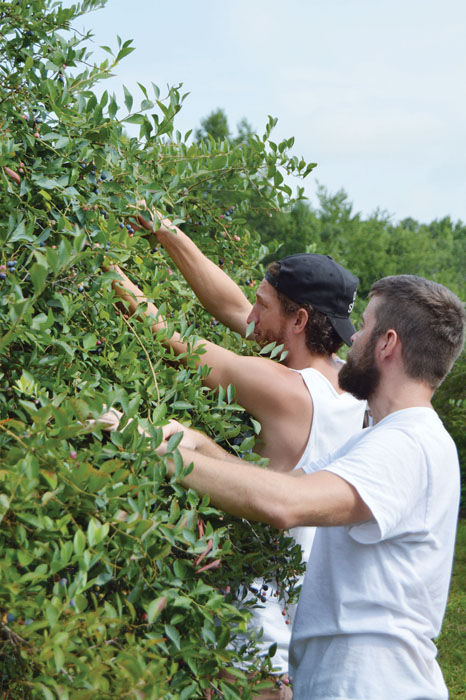 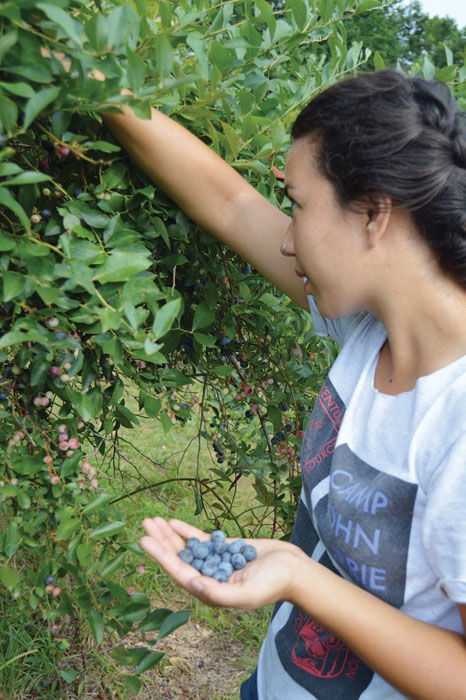 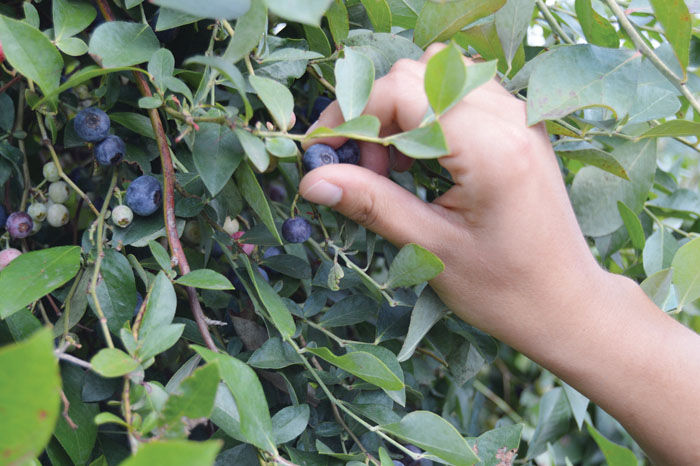 Bernadette Pelissier, her husband, Vann Bennett, and her children, Kether and Lyndon Smith, have begun nurturing a wild blueberry patch on their property, which people in the community have been picking for years. The family has a long history of berry picking.

The tradition continues at Cedar Grove Blueberry Farm under the leadership of Kether and Lyndon Smith. The farm was recently certified organic.

Amanda VanDerBroek / News of Orange
1 of 4

Bernadette Pelissier, her husband, Vann Bennett, and her children, Kether and Lyndon Smith, have begun nurturing a wild blueberry patch on their property, which people in the community have been picking for years. The family has a long history of berry picking.

It’s safe to say for brother and sister Kether and Lyndon Smith and their mom, Bernadette Pelissier, blueberries are just in their DNA.

“The blueberries have been [around] since I was a kid,” Pelissier said. “So it’s like, I’ve passed it on to my kids. It’s becoming genetic. … And now the grandkids are getting into it. It’s just this thing that’s passing down.”

Tucked away down a narrow farm lane off of N.C. 86 North, the blueberry bushes at Cedar Grove Blueberry Farm are slowly being freed from the growth of briars, Virginia creepers and honeysuckle vines. It’s been a labor of love for the family.

Last year, a dream became a reality for county commission vice chair Pelissier when she and her husband, Vann Bennett, purchased more than 90 acres of farmland in Cedar Grove.

“It all happened because Vann likes to look at land,” Pelissier said. “We always had this dream of buying land and then helping out young farmers, and my husband is going to retire in about three years. We went to our realtor, and we said, ‘Well, we’re going to just start looking; we’re not going to buy.’ And then we saw this place, and we couldn’t help ourselves. Then we found out that these other 5 acres were for sale, and we couldn’t afford it, but [Kether and Lyndon] bought it.”

When she heard her mom and step-dad were going to check out the property, Kether Smith said she got excited because it was the same spot where she had been picking blueberries for years.

“After they purchased it, they were like, ‘Well you should look at this other piece of land,’ because it is pretty much nested inside of theirs, and it has this remaining acre of blueberries,” Kether Smith said. “So now they’re now treated as one family instead of two properties, which is how it’s been in the past. My brother and my husband and I purchased that piece in December of last year. [It’s a] total of 4 acres of berries. We’re treating it as one unit so my brother and I are managing it all not just the 1 acre.”

For Lyndon Smith, the operation was the perfect fit in what he wanted to do with an agriculture business.

“I’ve been a lot of different things in my brief career,” he said. “I never had the opportunity to actually grow and make something out of it, and hand it to the consumer. I used to be a partner in a wine distribution company; we worked with all kinds of farm to fork, really high-end stuff. Basically, after four to five years, I started to not really feel good about my role in the system because you have people who work really hard, raising grape and making wine out of it, and they’re getting the least amount of dollar.

“I just felt not good about that. I just wanted something where we had the entire vertical.”

You pick, we pick

At Cedar Grove Blueberry Farm, visitors can come and pick their own organic berries for just $2 a pound.

Kether Smith said the operation works on the honor system where customers come with their own buckets or borrow a bucket, pick their berries and then leave their money in a box. For those who are not able to pick their own, the fruit can be purchased pre-picked.

The blueberry grove has been a longstanding fixture in Cedar Grove for decades with people coming to the farm from all over the area.

“As soon as the berries were ripe, people started showing up,” Kether Smith said. “I think they were going to show up whether we were here or not. There are people that have been coming for 20 years to pick here. It was never our intention to change that. We’ll keep running things as they have been. … Some people have their favorite bushes that they’ve been picking at for years, and they know where they want to go.”

While the you-pick feature will continue to be a mainstay, the brother and sister duo are also focusing on retail and wholesale as well as exploring other means of using the fruit in the future.

“We bought this property not only because of the blueberries but the warehouse,” Kether Smith said. “We have plans of fermenting. So we’ll do blueberry cider and blueberry wine. Like next year that should happen. We’ve already bought some equipment, starting test batches.”

Lyndon Smith said there are also plans to start a blueberry plant nursery on the property.

A labor of love

Soon after purchasing the property, Kether and Lyndon Smith realized they had a lengthy task ahead of them with freeing the plants from overgrowth.

“These bushes are at least 25 years old; we’re guessing closer to probably 30,” Kether Smith said. “They’ve been here for a long time. They haven’t been properly maintained. You can see some of them are very, very tall. There are a lot of fruit that is up high and hard to reach. There’s also a lot that are completely covered in vines. Further back it’s more jungle-like. It’s going to take time to address all of those.”

Lyndon Smith said that is the main goal after the picking season is over with is to get the plants back on to the road to health.

“Because this was an existing you-pick, the bushes are so prolific despite their neglect,” he said. “This was the focus was to get these things, these blueberry plants back to doing what they really can do. ’Cause it is a great resource to have.”

The farm was recently certified organic, something that is important to the brother and sister.

“You should be able to walk up to an apple tree or a blueberry bush and pick the fruit and eat it,” Lyndon Smith said. “You shouldn’t have to spray it with some type of acid and have it blown dry. We both have kids, and we don’t want to feed them low-quality food, so we better grow good-quality food.”

Kether Smith said the berries have not been treated with anything at all for much longer than three years.

“If things have been conventionally grown, and they’ve been sprayed or grown with non-organic approved products, then it takes three years to get approved,” she said. “You have to be clean essentially for three years. All we’ve done is applied mulch. We’ve weeded and mulch.”

Blueberries are ingrained in the memories of Pelissier and her children.

Kether and Lyndon Smith remember going to their grandparents’ remote farmhouse for vacation as children and picking the fruit.

“When they first talked about buying this property, and I got excited about the blueberries,” Kether Smith said. “When we were children, we would go to Pennsylvania, very rural Pennsylvania and there were wild blueberry bushes in the woods. And so that’s what we would do during our vacation is pick blueberries. We stayed at this old farmhouse with no television. It was rustic. We spent our time outside, and blueberries were a big part of it.”

Despite all of their memories, Pelisser said it was never a goal to farm them.

“None of us intended on being blueberry farmers,” she said. “But we all had this blueberry history, and so when we saw it, we just jumped for it.”

To learn more about Cedar Grove Blueberry Farm, go to www.cedargroveblueberry.com or www.facebook.com/pages/Cedar-Grove-Blueberry-Hill-Farm/127617937320303.